What do Elon's Starlink and Greyline Performance have in common? Summertime fun #hamr

Question: What do Elon Musk's Starlink and Greyline Performance Ham Radio Antenna systems have in common?

Answer: Both offer customers a "take it with you" versatility into the outdoors, and to share and connect with family and friends via technology; ham radio.

Today, Elon Musk's Twitter note made me think... "is he going to mention, or let it slip that he's taking his ham radio on a weekend camping trip?" or talk about how he grew up with access to his grandfather's shed filled with radio tubes and Collins S-line vintage ham radios? I searched Google and the closest I can find is when Elon tweeted, "CB Radios are free from Gov't/Media control." Maybe he meant, Ham Radio?

In any case, we can assume it's possible that Elon Musk was or currently is a Ham using an alias, anonymously working DXpeditions, or maybe getting a chuckle out of curated QRM from his spaceship /AM on the ham bands to get a rise out of the notorious characters of our time. It's possible, right?

Looking at history, there is a resemblance between Elon's character and other famous Amateur Radio operators of old, that even still are bigger than life.

There is a distinctive commonality with these vintage radio ops of yesteryear (I'd say it is less so today) the now well-known industrialist billionaire, engineer-entrepreneur archetype, the likes of Elon Musk (who again may have a ham callsign under an alias) to Howard Hughes (callsign: 5CY, W5CY), Marlon Brando (KE6PZH, FO5GJ) who later operated from his private island quite often, and Priscilla Presley (N6YOS now reissued), wife of Elvis Presley, to the many female code breakers working from Bletchley Park to the Pentagon using Enigma's and morse code to discern intel on the bad guys, even if less than celebrity status has their title as "Typist."

"Another local operator was teen-aged Howard Hughes, Jr., of 3921 Yoakum Blvd., who reportedly had a whole room of his house full of wireless equipment; he operated general amateur station 5CY with 500 watts, communicating with wireless operators all over the world. This is now Hughes House on the campus of the University of St. Thomas." - - Houston Radio History Blog

We hope this inspires you to get outside and just maybe take your ham radio with you.

Taking a page from Elon's note above and looking at the summertime fun, mixed with ham radio, let's follow his lead and consider that whether you are using Greyline Performance antennas or something else, summer radio conditions are quickly approaching.

We are already hearing radio operators getting outside and into nature. Mountain toppers are taking off their parkas, and northern island outposts north of the Arctic circle are popping up on the band map too. The outdoors is coming alive again, all around us. #outdoors #POTA #SOTA

What do these DXPeditions have in common?

Vertical antennas. If THEY are that loud all over the planet, taking their antennas with them. Maybe a vertical can work for you too this summer?

This reminds us of a Blog post from last year when KL2A took his family into the Sawtooth Wilderness Preserve with a Ski Bag antenna set up and his ham radio. This part of W7 is a dark sky preserve north of Sun Valley, Idaho. A lovely, quiet place to connect with nature and if you are like Jon, find a spot to erect your vertical dipole!

Will you take your ham radio antenna with you in the RV? To a campground or national park, or into the outdoors?

with a Greyline Performance HF Vertical Antenna and 40 Watts in the Sawtooth Wilderness near Sun Valley, Idaho.

"The 28' Greyline Vertical Antenna was so quiet on all bands up on that high ridge with what seemed a reflection of signals from the giant granite mountain to the east. I could hear a pin drop in NY from up there. If I could hear them, I could work them!

At Greyline, we get long lists of emails, many of which are requests for more examples of summer portable operation. I happen to have a blog post from last summer I can share here that showcases camping and RV summer travel operations. This can apply to DXpeditions too as the antenna breaks down into 4' sections and easily slips into a Ski Bag. I've taken mine from high mountains to ocean villas. Here are my notes from the mountains of Idaho one smoky fire-season weekend. 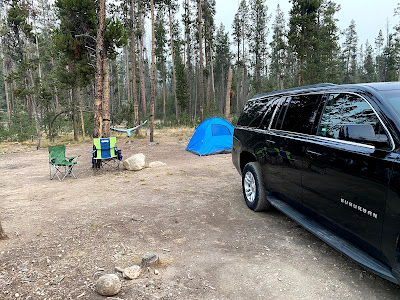 Packed up my ski bag ham radio, and a portable go kit including the Greyline Performance HF vertical antenna, coax, remote tuner, CW paddle and so on, and headed for the mountains of Southcentral Idaho, north of Sun Valley in the Sawtooth Wilderness Preserve.

As luck would have it, there was a four-hour CW sprint contest called NAQP (North America QSO Party) Saturday night, just about the time I would land at a campground for the evening. These contests are very popular and the bands are sure to be full of activity for the full 4-hours. I was excited to give the antenna a high mountain air test run and there should be lots of guys to try and work.

Arrived at the campsite amidst a smoke bank coming in from WA/OR. It's fire season but the signals won't mind. Such a super quiet location and it took a while to find. Most spots were below a hill along a river. This location was along a ridge-line way up there.
Built the station in about 20 minutes and started the radio about halfway into the contest.

1. Removed the Ski Bag from the Suburban, unzipped the bag, and connected the 7 or 8 4' sections, Finger tight was fine as this was temporary.
2. Found a stump and leaned the pole up alongside it and roped it tight to the stump.
3. Ran the 75' coax line from the truck to the antenna site. Connected the pigtail and Remote Tuner being sure to elevate the tuner a foot or so above ground on whatever I could find.
4. Plugged in the coax to the radio
5. Engaged the tuner to tune up on the bands (a few seconds)
Total elapsed time: 15 minutes
Once on the air, I felt pretty loud considering half power or less at 40W. Almost everyone I called heard the signal. Wow. 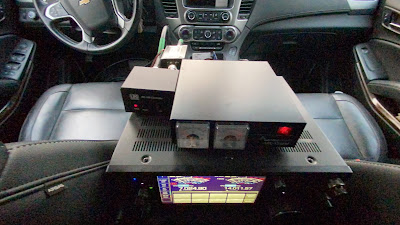 The Suburban 12V did not allow full power so 40 Watts was set.
The antenna used is a 28' Greyline HF Vertical Antenna. At 35 pounds total weight I easily maneuvered it and tied it to a stump 75' or so from the truck for the night.
Using the included 3' of PVC pipe and stout ground support section (which is not part of the active antenna element and used only for ground support) pushed the antenna to ~27' total height at the top. 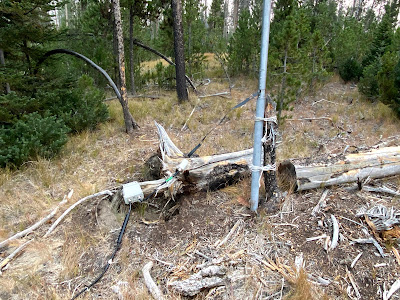 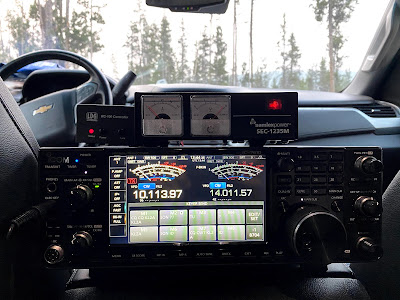 Cockpit: ICOM
The cockpit inside the suburban was roomy and comfortable enough. I have noted for next time, a tent, table, and chair.
Power:
Using standard power from the 12V AC/DC outlet in the truck I was able to get 40W out without tripping the Chevy circuit breaker. The heater was on low to keep the fan noise down and the fingers warm.
Operation:
40M and 80M were hopping full of CW signals from coast to coast. It felt like I was looking down on all of them from up here. So quiet compared to home. Also, it seemed the tall granite peaks around me were reflecting signal in my favor... it certainly felt I was indeed that loud compared to my home QTH below the hill. So, transmit and receive are both enhanced from this rural high outpost.

I could hear everything and everyone on the bands. W1-4 signals filled 40 and 80M CW (east coast) and I worked them easily on both bands with the 40W from the radio.
Having guys hear me easily was a treat. Back home, with hills all around me, I'm boxed in. Amazing what a quiet location and a high up in the hills take-off will do.
In the end, I attracted 140 QSOs in about 90-100 mins on the air. My fingers were a little chilled, mosquitos were really trying to get in the crack in the door owing to the coax, and some got through causing itchy fingers on the way home, but it was all worthwhile.
What a blast having a real antenna on the air once again.
The NAQP CW SPRINT is the "Best 4-hours in radio!"
Bonus: Tuned the bands at sunrise before packing out of camp and warming up the truck. It was cold in the tent, 28F at sunrise, and still smokey.
+ found PJ4A (NN3W) at the Bonaire Island Radio Station PJ4A on 20M WAE SSB
+ a 40M tune also found W6YA working YF8HVY. Very quiet QTH in the mountain country.
W6YA + YF8HVY 40M CW DX (sunrise)
PJ4A (NN3W) WAE SSB 2020

Remember, this is a 15-minute vertical antenna install on a camping trip into a national park. Not bad, right?
In Summary, just about any decent antenna at a quiet location will work to offer you loads of fun on the ham radio. In my case, and with many experiments in the woods, an 80M Inverted vee hung in a tree at 50-60' tree fed with open-wire line works about the same as this Greyline vertical dipole antenna. (VDA). Have a great summer. We will look for you on the bands.

What our Customers are saying?

"I dug a hole in the back yard to please the wife, poured concrete, and then she says, 'it's beautiful, let's put it in the front yard.' So, I dug another hole. Happy Wife, Happy Life, you know..."

Greyline says: Sorry about the extra work but how cool is that the XYL is in favor of your ham radio antenna and wants it in the front yard for all to see, just where you originally wanted it anyway! Good on you, sir. Well played.

Will you share your DX adventures with us?
Please send in a picture or YouTube video of your shack, antenna, or some action shots of the bands coming alive using your Greyline Antenna. We'd love to share your story of good news with our peers around the world at large.

Simply reply to this email, we'd love to hear from you.  flagpoleantennas@gmail.com  - Thank you!

Would you like to work the world from home or in your RV or camp site within just a few minutes of parking? You can...